Crash Site of The Alien Comic 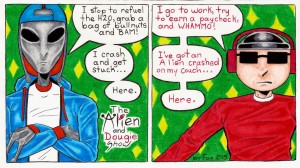 THE STORY BEHIND THE STORY
Twenty-two years ago, I was in class, and probably should have been working on math equations, instead I was sketching. I couldn’t know it at the time but that baseball hat wearing alien would stick in my head.

The drawing from back then is somewhere in the boxes of old art hiding out in my closet. In place of the real thing, I’ll describe it here.

Over a few panels the reader sees Alien dig his way out of the rubble of a crash site. In the last panel he stands on top of the bricks and dirt of a destroyed building.

I wish I could remember the speech bubbles (I thought they were pretty cool at the time, lol).

At first the idea was to turn Alien into a full-fledged comic book. All of my character creations back then were going to be comic books. Maybe a few might make guest appearances in future strips. But I digress. The story would be about an alien whose own behavior would be influenced by modern media (the ‘90s lol). He’d dress and talk like a rap video one day and a heavy metal one the next. Some days he’d be inspired by The Fresh Prince or Friends. Up until that point all of the “Aliens come to Earth” movies I’d seen involved E.T. who were influenced by old tv transmissions. Movies like Spaced Invaders, The Explorers, and Earth Girls Are Easy. I wanted to do something more contemporary. (Thanks, Paul).

All these years later I guess I’m a little late to the game.

A few months ago I watched Stripped. In case you haven’t seen it, it’s a documentary about the artists, the fans, and the evolution of the comic strip. I was inspired enough to watch it three times and counting, but I also thought of Alien again after all those years.

The first sketch was a one-off page, so why couldn’t I turn Alien into a comic strip? I could.

*Thank you Internet btw, wouldn’t be possible without you.

Alien was brought back to life!

But he needed a friend, a guide to help him understand the world he’d only observed from afar (and occasionally taken samples from). Our world would be so very different from his own, which as you’ll find out in his bio, he can never go back to.

The creation of Dougie was easy, his parents might even say “Fun”. Sometimes he’d be Abbott to Alien’s Costello, or sometimes I’d switch it around. I’d try and make him as typical an eighteen-year old as I could remember being or that I see around me on a regular basis just trying to buy a few groceries, lol. Have you ever noticed how often museum & gallery tour guides tend to be young people reading off of scripts? Occasionally they add bits and pieces they pick up from the older employees who work there studying the actual works of history. That’s exactly the reason I chose to make Dougie the kind of tour guide who is learning things along the way himself. But because he is eighteen, he believes he knows everything already. In many ways, he’s the teenage version of myself. Except back then I wore a trench-coat and wide leg jeans, and my hair was long and white-blond. Dougie dresses more like I do now.

I hope along the way – with Alien’s help – I can give him a bit of the wild streak of character I once had. I was always the crazy friend.

And that’s the simple but long-winded story of how the Alien & Dougie Comic came to be. I admit it’s nothing spectacular. It has been a long and interesting journey for me. I think I had to earn the experience and perspective time required before I could truly create it.